Sign up for our newsletter to get 20% off site-wide!

You know Betty White as a talented, funny, and charming actress who, at age 96, still makes regular appearances on TV and movies. But did you know that she is also a life-long animal lover? 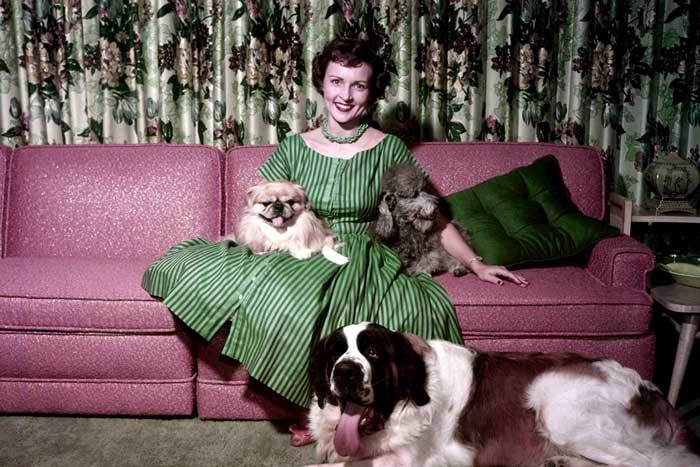 Betty White at home with her dogs Bandy, Stormy, and Danny in 1954. Credit: Eclectic Vibes

Betty White starred in The Golden Girls, Hot in Cleveland, and has played roles and made cameos in many other plays and movies. In Betty's eyes, the real stars have always been animals. She says, “We had a lot of Pekes.  We loved Pekes because they’re such stalwart little guys and they’re so bright.  So we had Pekes, and Chow Chows, and jack of all trades- mixed breeds.  We had a German Shepherd, Dolly… and Cocker Spaniels.  I was a lucky little girl.  I had parents who’d bring something home and say, “hey, Betty, he followed us home.  Can we keep it?”

(Pontiac, Betty White’s Golden Retriever, is rumored to be in her will. He could inherit a whooping $5 million from White, in the form of a trust fund. That could buy a lot of dog treats!)

Betty White loves animals so much that she wrote a biography about her life with animals. "All her life, Betty White has had a menagerie of pets, many of them rescued, and has donated countless hours and resources to animal welfare. Animals are her passion, and that passion extends to zoos and their importance for the conservation of species and for offering humans the ability to witness the grandeur and variety of these magnificent animals from around the world."  —Description of Betty & Friends: My Life at the Zoo

Do you love pets *almost* as much as Betty White? Enter your furry friends in Page-A-Day's pet contest now and share your love with the world! Each year, we publish hundreds of pets from our community in our bestselling 365 Dogs and 365 Cats, and on our website and social media channels. It only takes a few clicks to enter!

Find your favorite cat and dog calendars at Page-A-Day!

Pick up a calendar for all the animal lovers in your life!

Publishing for the first time this year! Shop our newest calendars!

Find the perfect gift for a dog lover!

Shop calendars for cat lovers for 2022!

More from our catalog